Evelyn won tickets (from Geek Girl Con) to see My Sucky Teenage Romance at the Seattle International Film Festival this weekend.  So we made a Geek Outing of it and took the family.
The director/writer of the film was on hand, Emily Hagins.  Amazingly, this is her third feature film and she is only 18 years old!  Wow!
My Sucky Teenage Romance is about vampires at a sci-fi convention complicating the lives of a group of friends who are just graduating from high school.  It reminded me a lot of an early Joss Whedon film, and it took some well deserved digs at the whole "sparkly vampire" craze.
The film was a lot of fun and the director was a lovable Geek of the first order.  Catch it if you get a chance. 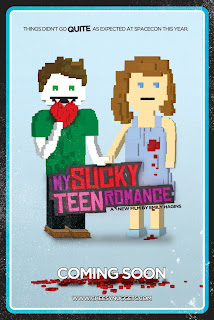