Button, Button, We've got the Buttons

We have been making Geekery Button Sets for sale at shows.
5 original designs for $4.00
Think we should put them on the Etsy Store?
Would you buy a set of Geekery Buttons?

Robots are Taking Over, and That's OK 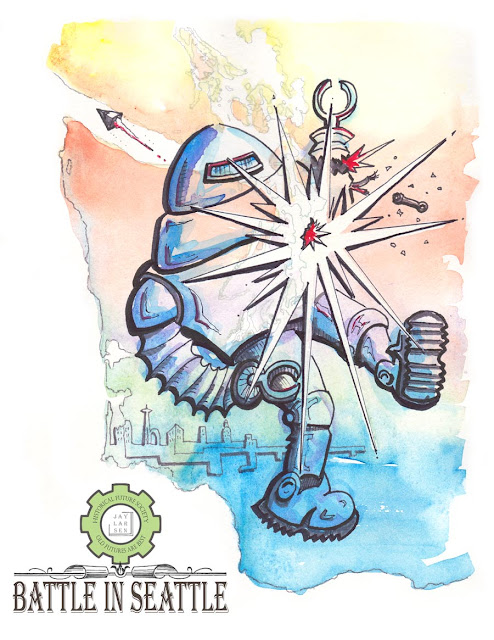 The Robots are taking over here at LarsenGeekery, and we are OK with that!
My latest piece is called, The Battle in Seattle.  And it depicts that famous retro futuristic robot battle that stressed Seattle to the limits in that Historical Future that hasn't happened yet, but should.
You can get Greeting Cards of the Robot Battle at our Etsy Store.
You can also get the Repair, Reuse, Recycle Robots for the Resistance, that I posted earlier, at the Etsy Store as well.

When the World is Running Down...

You make the best of what's still around.

Stop Freaking Out!  And Start Geeking Out!
LarsenGeekery is here to help. 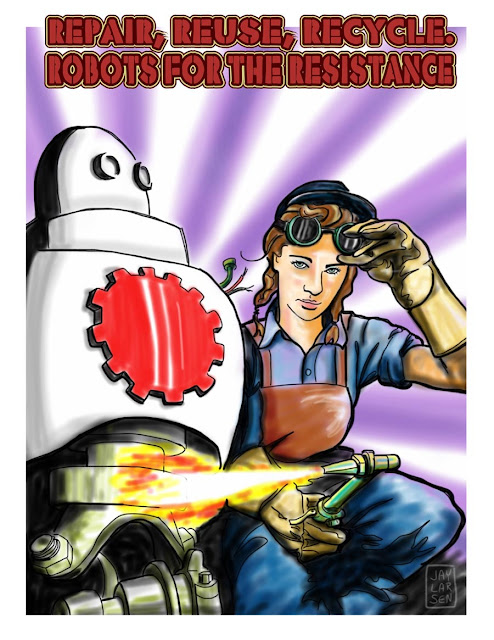 We are busy making things for customers, friends and upcoming shows.
Now would be the perfect time to visit our Online Shop and get some Geekery Gear.
Resist the mediocrity of mass culture.  And Upcycle Your Life into something Great!
-- Jay

Posted by Jay Larsen at 1:10 PM No comments:

Here is the Emerald City Comicon 2013, in comic form, at least as we experienced it:
Your experience of ECCC may have varied. 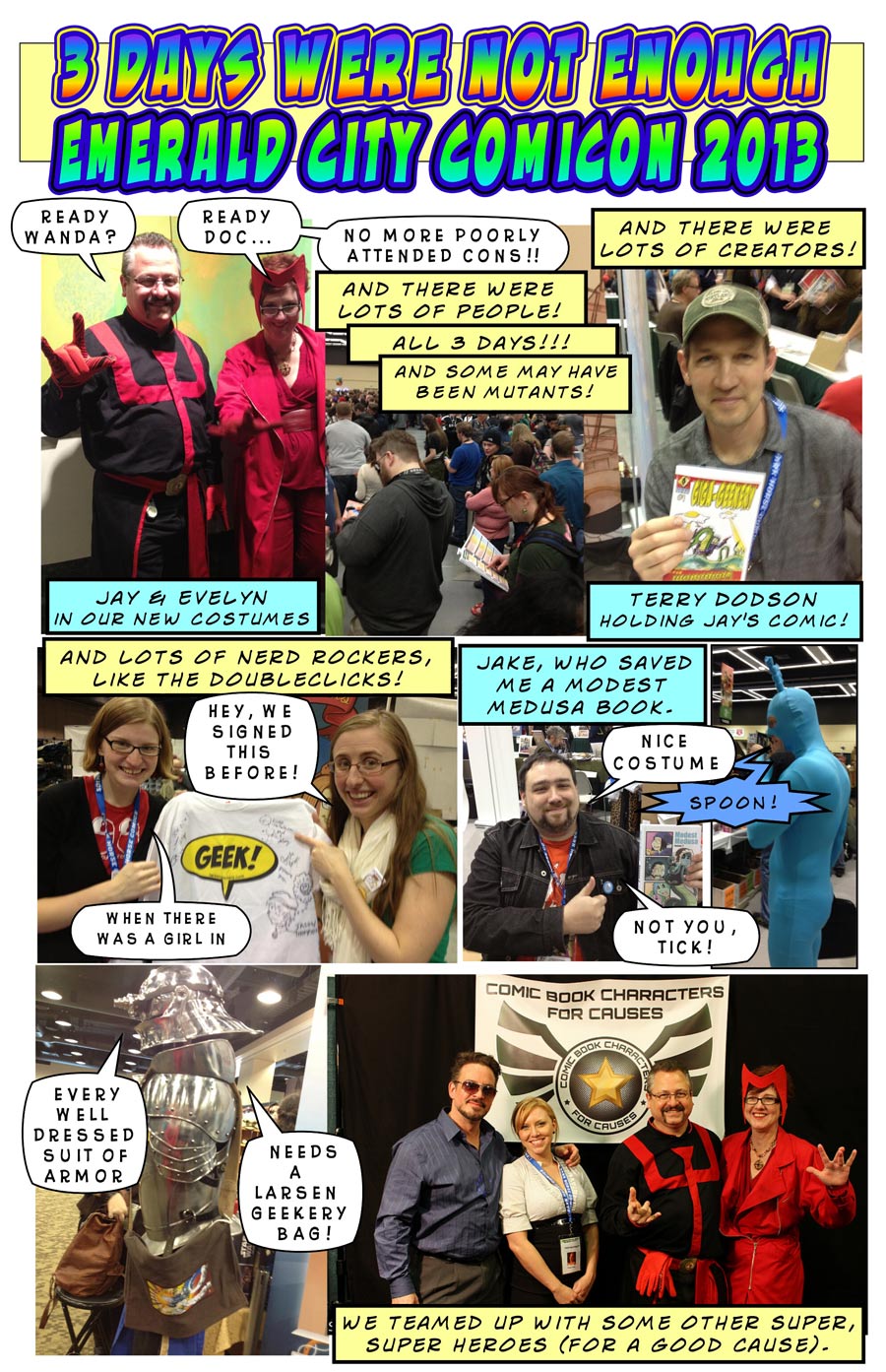 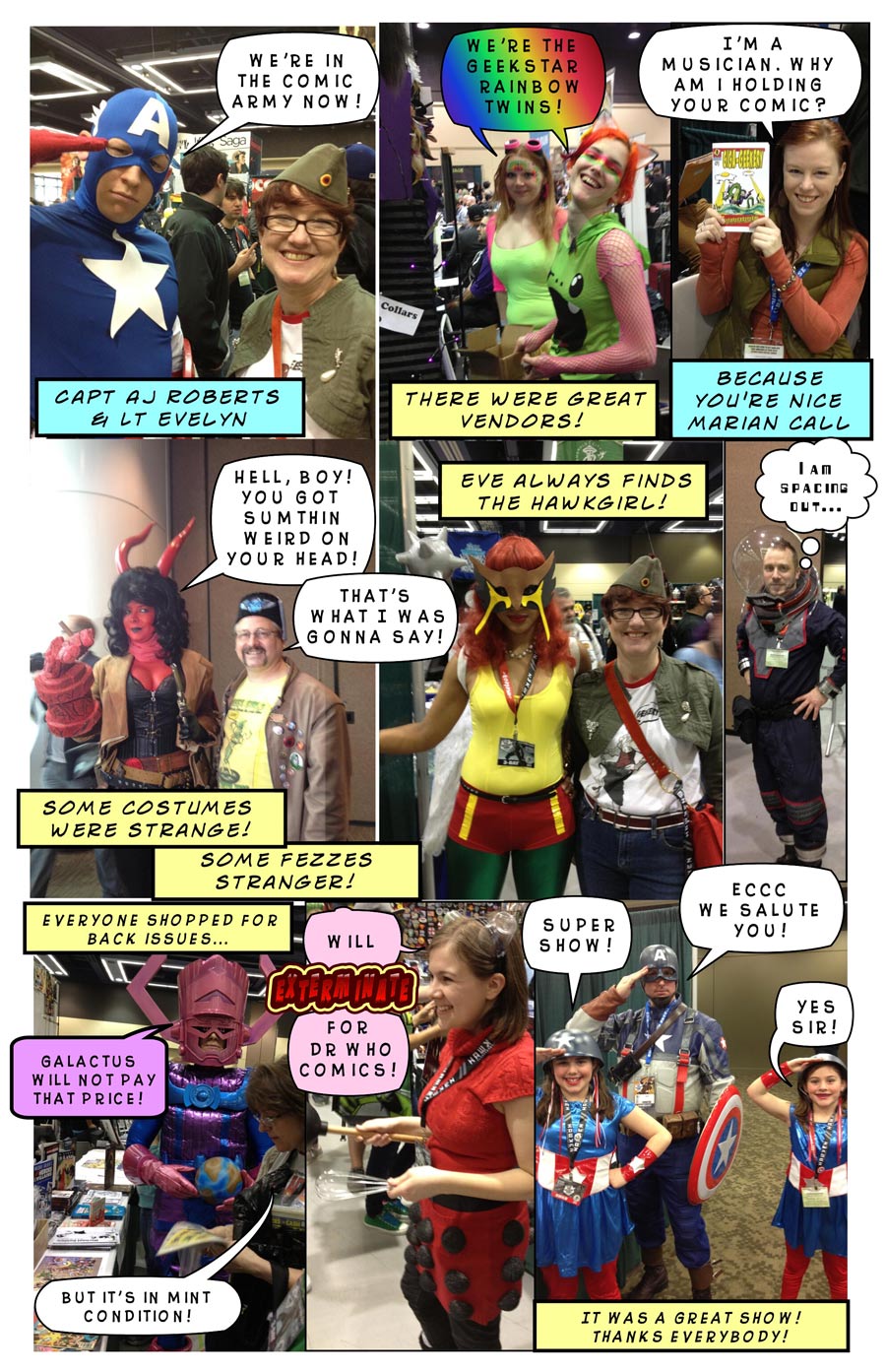 Evelyn and I had a fantastic time.
We dressed up as Doctor Strange and the Scarlet Witch.
We met lots of great comics people.  Saw tons of vendors we know and love.
Bought way, way too much stuff.  (Can you have too many comics??)
The show sold out all 3 days.
I heard people say there were 20,000 people there.  I think I bumped into at least 10,000 of them.  Sorry about that.
May put up some more personal pictures later, or on Facebook.
So much Geeky energy gives me all sorts of Geeky ideas.
Got to get to work.
Thanks to everybody who worked so hard to put on the show, to show things at the show, to attend the show.  It really is a very friendly group of people.
ECCC 2013 was a Huge Success!
-- Jay
Posted by Jay Larsen at 4:49 PM No comments: 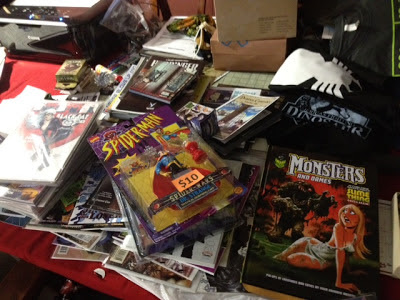 Emerald City Comicon 2013 was...WOW!!!
Jim and everybody put on a great show.
It deserves a better post, and I will create a better post.
But first we have to dig out from under the humongous pile of crap...I mean treasures that we acquired at the Show.
And we have some day-job-type tasks to do for people who don't understand how you can disappear for 3 days into a magical kingdom of Geek called Comicon!
Back Soon with a more coherent wrap up on the show...
Posted by Jay Larsen at 9:13 AM No comments: