By Lazy Jay
Marvel Comics announced it is killing 9 books in October: Captain America, Fantastic Four,FF, Incredible Hulk, Invincible Iron Man, New Mutants, The Mighty Thor,Uncanny X-Men and X-Men Legacy.
Hey, I was reading most of those!  Fantastic Four and FF were at a change over point, so that makes sense with Hickman leaving.  But New Mutants were never given a good chance to get off the ground, and Uncanny X-Men had just restarted after the whole Schism thing.
I wasn't sure what Marvel was going to do after AvX...
But then they announced they are Relaunching things in the aftermath of Avengers vs X-Men (which I am not in love with, by the way).


But Marvel's relaunch will be NOTHING like DC's New 52 relaunch, where everything started over in the same month.  No, Marvel will stretch this non-relaunch out over several months. And they are playing mix-em-up with all the title names: "Uncanny Avengers"?  Really?
Jean Grey comes back from the past and Samuel L. Jackson's version of Nick Fury takes over the entire Marvel Universe, this time as Nick Fury Jr.
They are calling this new thing Marvel NOW, and I'm sure we will hear more about it as San Diego Comic Con rolls out this week.


On a good note: The preview picture has Rocket Raccoon in it!  So there is that! 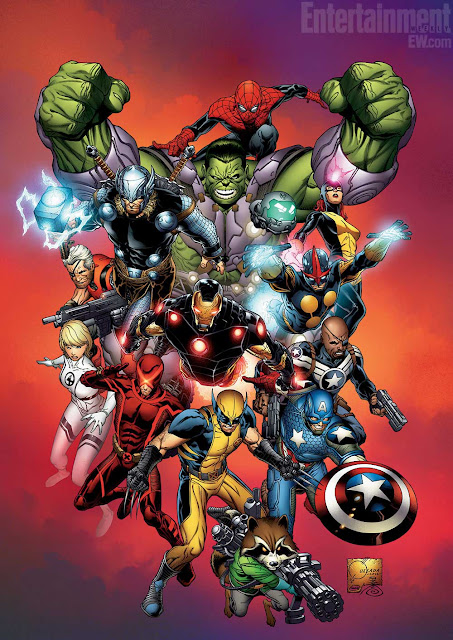 
I really liked 5 out of the 9 books they are killing for this slow-drip relaunch.  So I hope Marvel puts together something at least as good to replace them.


I guess the part of all this I dislike the most is hearing all this hype about October while I am still reading July's comics.  So current issues keep getting this big shadow of the future cast over them with all these previews.