Geeking Out About Terry and Rachel Dodson
By Lazy Jay 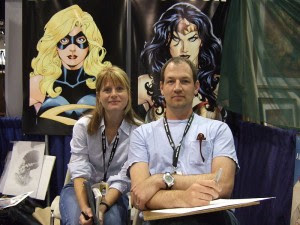 I think it is very cool that real life husband and wife, Terry and Rachel Dodson, team up to make such great comics together.  Terry draws in pencil and Rachel inks them.  The end results are fantastic.  I have really enjoyed their Wonder Woman run, X-men stuff, Spiderman, but my most favorite of all are the new Defenders, which are written by Matt Fraction (mostly because I’m a sucker for Silver Surfer and Doctor Strange).  Defenders is one of the best comics of the year so far, cosmic and quirky—lots of fun all around.

You can check out the Dodson’s work at The BoMBSHELLTeR, their official website.  I like this new cover for Marvel’s Defenders #4 they did, where Doctor Strange and a mysterious redhead are obviously modeled after me and my wife Evelyn. (What, you can’t see the resemblance?  I do...especially that mystical mojo and the arched eyebrows.  Looks just like us.)
The Dodson’s are scheduled to be at the upcoming Emerald CityComicon (ECCC 2012) here in Seattle at the end of March.  I’m hoping to meet them and ask what it is like having all that talent under one roof.

Three Geek Cheers for the Dodsons!  Their work is definitely worth Geeking Out About!