Which is the noise I’ve apparently been making a lot these last few days while. That and some other choice words I’ll leave up to the imagination. I’ve been finishing up some of the last minute projects for Emerald City Comicon. Because it’s seriously right around the corner and there’s so much that needs to get done. Fortunately with such a short deadline, my projects are coming together quite nicely. 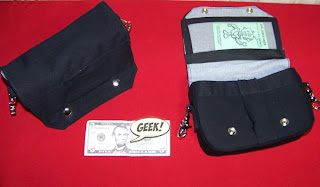 I’ve been so busy though, I had to set up my second sewing machine side by side! Just so I could finish up two more belt-loop pouches. I have also taken up the front entrance since it has the most solid surface. It happens to be the best place to set up to pound snaps into what I’ve been calling ‘man pants.’ It’s fun to say. Go ahead, say it out loud right now: man pants! It’s cool, right?

What makes ‘man pants’ so unique? For starters they have a wide waist band, deep pockets and plenty of room in the seat and rise. I’ve been using heavy twill so they’re rugged like denim or cargo pants but also comfortable. They look nice and the all-cotton fabric breathes and allows air to flow. They can handle the pressure of a long day at the comicon or whatever else you might want to use them for. But the real geekey thing is that they’re fitted around the calf so you can wear boots. Or just to get that same look as wearing spats without having to be dressy or uniformy.

Nobody else you know will have them, because they’re not as geeky as you… unless they also come to larsengeekery.com